Showing posts from August, 2014
Show all

11 Things Only A Ski Rep Will Understand

An El Nino Winter – what would that mean for the season ahead? Posted: 8/14/2014 12:17:54 PM by Richard Smith@Ski Lifts
There is growing chatter that we could be about to head into an El Nino year and this is particularly prevalent on ski forums, where people hypothesise about what that might mean for the winter ahead.

An El Nino event (http://en.wikipedia.org/wiki/El_Ni%C3%B1o) is basically caused by warm ocean waters forming in the Pacific, which then sets of a chain of events which can cause significant changes to global weather patterns. Obviously the more noticeable effects occur the closer you are to the Pacific and then gradually reduce the further away you get, but there are plenty of theories that there can be some noticeable effects on the ski season.
Read on..

August 12, 2014
Do you have nerves of steel, balls of fury, and at times a lack of better judgment? If you answered “yes” to any of these, start planning a trip to these 10 resorts. These ski slopes were selected by the New York Daily News and appear to be in no particular order. They are not the top 10 ski slopes we would have chosen, but these list are always fun to check out. Read on..
Post a Comment
Read more

Top class footballers are banned from other sports where they could get injured reports PlanetSki. At Barcelona the players have been told they cannot ride motorbikes either or pursue other risky pastimes.


Footballers are expensive commodities so any injury in another sport needs to be eliminated.
This week the Spanish newspaper, Sport, has revealed that the new boss at Barcelona is introducing a strict new disciplinary regime.
Luis Enrique has specifically banned skiing and snowboarding. The resorts of the Spanish Pyrenees are just a 2-hour drive away from the city.
Players will be fined up to €6,000 if they take to the slopes.
It is the same in England for Premiership players who are unable to ski and risk injury.

PlanetSKI we interviewed the former French player, David Ginola, and he admitted that he broke the rules while at Tottenham and Newcastle and did take to the slopes; see here for that story.  He is a passionate skier and considered a career as a racer before chosi…
Post a Comment
Read more 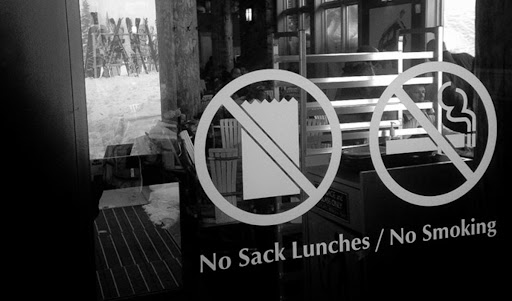 by: Kade Krichko I find temporary solace in my homemade sandwich—it’s simple, effective, and even tricks me into thinking I’m not spending my life savings on a day pass. So when an attendant at a resort’s mid-mountain lodge told me my lunchtime masterpiece wasn’t welcome on premises, I was a bit—how should I put this—pissed.  The Lunch Enforcer at Crystal Mountain, Washington, continued tickling rage receptors by informing me that not only was my bagged lunch not welcome at the mid-mountain hut, but also not on the top two floors of the base lodge, at least from 11 a.m. to 1 p.m., when lunch hours are enforced. Graciously, the mountain would, however, let me eat my meal in a basement locker room. A brown bagger for life, I had become a ski area outcast, my scarlet letter written in gooey raspberry jelly. So, uh, what the eff guys? With more resorts jumping on the bandwagon, I have to wonder when packing a lunch turned into a badge of social inferiority.
The brown bag has…
Post a Comment
Read more
More posts